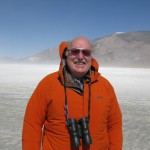 Located beneath the peaks of the southern Sierra Nevada, Owens Lake is the remnant of the Pleistocene era. The lake began to recede at the end of the last glacial age. This process was accelerated by the opening of the City of Los Angeles Department of Water and Power Owens Valley aqueduct in 1913. The diversion of the inflow of the Owens River resulted in the drying of the lakebed by 1924.

The lake shriveled to a brine pool surrounded by friable alkali soils and became the sourceof huge dust storms which created plumes as high as 10,000 feet in altitude and drifted for 150 miles downwind. The loss of more than one million tons of lakebed per year made the lake the largest source of PM10 emissions in the United States.

As a result, Owens Dry Lake was designated by the EPA as a “serious non-attainment site pursuant to the Clean Air Act. The City of Los Angeles was required to mitigate the air quality effects of its water diversions. The mitigation effort is subject to oversight by the Great Basin Air Pollution Control District and DWP activities on the lakebed lie within the jurisdiction of the California State Lands Commission and California Department of Fish and Game. Dust control has been accomplished through the introduction of managed vegetation and application of water creating shallow flooding of more than 40 square miles of surface. These control measures have been successful at significantly reducing the dust problem.

The return of water to the lakebed brought large populations of migrating and nesting shorebirds and waterfowl and songbirds which led to the designation of Owens Lake as an Important Bird Area by the Audubon Society.  The Eastern Sierra Audubon chapter initiated talks in 2008 aimed at preserving the Owens Lake wildlife habitat.  This led to a collaborative process to develop a management “Master Plan”  for Owens Lake.  Close to 40 stakeholders spent almost two years meeting as a planning group and the draft plan is now working its way toward adoption.  The plan has co-equal objectives to achieve dust control on the lakebed, reduce the potable water commitment to the lake for dust control purposes and maintain and enhance habitat.  Development of the plan has been a challenging process, rich with promise but not without frustration.  It is an attempt to re-define the relationship of interested parties and create a working process to shape the future of the lake.

Peter Pumphrey is a retired attorney who served as an environmental prosecutor with the San Joaquin County Office of the District Attorney.  He is the vice-chair of the Lahontan Regional Water Quality Control Board, chair of the Chalfant Community Fire District, President of the Eastern Sierra Audubon Society, an advisor to the executive committee of the State Bar of California Environmental Law Section, a member of the Lands Committee of the Eastern Sierra Land Trust and serves on the Hearing Board of the Great Basin Air Pollution Control District.  He is a licensed fishing guide and contributes to California Fly Fisher magazine.  He lives near Bishop, California where he helps out at Mule Days, works in the garden and hikes, backpacks, fishes and skis in the backcountry.