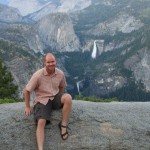 The Great Salt Lake (GSL) and its associated wetlands is a crucial migration and wintering site for millions of waterfowl and waterbirds. Brine shrimp cyst harvest within the GSL is an economically important industry in the Salt Lake City area. Commercial activities may reduce food for wintering birds or alter distribution of populations.

The primary objectives of this research are to examine the affects of cyst harvest and origin of waterfowl on distribution and density of waterfowl, and influences on diet and contaminant levels. We conducted aerial surveys to examine population size and distribution on GSL during migration and wintering periods. We collected birds to examine diets and remove feathers for stable isotope analysis. Waterfowl migration has been studied through the use of banding data for decades.

Anthony J. Roberts was awarded the 2011 Doyle W. Stephens Scholarship. He will be presenting his research during lunch on Thursday, May 10th following the announcement of the 2012 scholarship recipient.

About the Doyle W. Stephens Scholarship

Recently stable isotopes from feathers have been recognized as a useful tool in studying avian migration, providing a larger sample size in a shorter period of time. Water in food eaten during molt supplies a unique signature to feathers based on latitudinal variations. Waterfowl populations were highest in October, with over 650,000 birds present. Populations dropped throughout winter months, reaching a low of around 21,000 birds in February. Brine shrimp cysts occurred in waterfowl diets during every month of the study period and wetland plant seeds and brine fly larvae made up the remainder of diets.

Waterfowl use of brine shrimp cysts as a food source during the commercial harvest season may result in conflict between harvesters and wildlife. Spatial use of GSL by waterfowl may mitigate this conflict. Birds congregate in areas where harvesters are sparse such as near freshwater inflows and in areas too shallow for commercial fishing boats. Banding data show birds wintering in Utah have to travel over 1000 km less than average and save up to 3500 km of travel distance from some wintering birds. Stable isotope values implied that Northern Shovelers wintering on the GSL originated their migration further north, with an average latitude in central and northern Canada and southern Alaska. Migration paths and breeding origins will help determine how waterfowl are building up harmful contaminants and how food sources on the GSL affect subsequent survival and breeding attempts.

I was born and raised in the Midwest, principally Omaha, Nebraska. Since graduating high school in 2001 I have studied and lived throughout the United States. I received a Bachelor’s of Science degree from the University of Wyoming and a Master’s of Science from Texas Tech University.I have worked with various bird species in Nebraska, Florida, Georgia, New Jersey, and now Utah on the Great Salt Lake. My research philosophy is focused around improving management of natural resources through sound science. Outside of school and field work I enjoy many outdoor activities such as hiking, skiing, hunting, and kayaking.