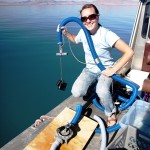 Mercury and nutrient transfer from the deep brine layer to artemia franciscana in the Great Salt Lake, Utah

Utah’s Great Salt Lake has been divided by a railroad causeway that has led to chemical stratification in the lake’s South Arm, as saltier, denser water from the north underflows into the south and has limited mixing with the surface water.

The anoxic condition in this “deep brine layer” promotes production of highly-toxic methylmercury (33 ng L-1 MeHg). In the laboratory we used two types of experiments to simulate whether Artemia franciscana (brine shrimp) could accumulate mercury by: (1) feeding at the interface of the mixed and deep brine layers, and; (2) being exposed to this mercury when it is mixed into the upper layer.

Surprisingly, in both experiments brine shrimp grown with deep brine layer water had less mercury than those grown in just mixed-layer water. Additional analysis demonstrated that this was due to the very high particulate organic carbon (POC) present in the deep brine layer that lowers the ratio of Hg:POC. Consequently, although overall mercury levels are extremely high in the deep brine layer, the mercury in that food is actually less concentrated than in food from the upper mixed layer of the Great Salt Lake.

Erin recently received her BS degree in Fisheries and Aquatic Science from Utah State University. She was an Undergraduate Research Fellow, an Honors student, the Outstanding Undergraduate Researcher of the Year (2011) and Scholar of the Year (2012) for the College of Natural Resources.
She has worked with Wayne Wurtsbaugh on the Great Salt Lake for 3 years, focusing mainly on mercury and nutrient transfer from the deep brine layer of the South Arm into brine shrimp. Her plans for the future include pursuing a graduate degree in a limnology- related field, and eventually working as a professor at a research university.