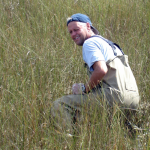 On December 16, 2011 the U.S. Environmental Protection Agency promulgated a new national rule limiting mercury emissions from coal-combustion electric utilities. nearly a quarter of a century after the first realization that atmospheric mercury emissions and long-range transport were the principal causes leading to widespread observations of elevated mercury in fish, the new rule seeks to reduce by 90% the emissions from the largest unregulated mercury source.

USGS science has played a key role in informing the USEPA during their deliberations, particularly for demonstrating how important recent emissions are for driving current fish contamination levels. Krabbenhoft will describe some of the key research that was central for understanding how the environment will respond (timing and magnitude) to changes in mercury loads, and points to new important directions for continuing research on mercury in the environment.

David Krabbenhoft received his Ph.D. from the University of Wisconsin-Madison in 1988 and has been a research scientist with the U.S. Geological Survey since. He has general research interests are in biogeochemistry and hydrogeology of aquatic ecosystems. Dave began working on environmental mercury cycling, transformations, and fluxes in aquatic ecosystems with the Mercury in Temperate Lakes project in 1988; since then, the topic has consumed his professional life.In 1994, Dave established the USGS’s Mercury Research Laboratory, which includes a team of multi-disciplinary mercury investigators and a state-of-the-art analytical facility strictly dedicated to low-level speciation analysis of mercury.In 1995 he initiated the multi-agency Aquatic Cycling of Mercury in the Everglades (ACME) project, which is still ongoing. More recently, Dave has been a Primary Investigator on the internationally conducted Mercury Experiment To Assess Atmospheric Loadings in Canada and the US (METAALICUS) project, which is a novel effort to examine the ecosystem-level response to loading an entire watershed with mercury.Currently, Dave’s research team is active on projects that span environments as far ranging as the Pacific Ocean to freshwater systems in Alaska to Florida, and from California to New England. In recent years, the Mercury Research Team entered into the realm of atmospheric research by constructing and deployed the USGS Mobile Atmospheric Mercury Lab, which has the capability for rapid deployment and advanced study of mercury in the atmosphere.Since 1990, he has authored or coauthored over 100 papers on mercury in the environment. In August 2006, Dave served as the Co-Chair for the 8th International Conference on Mercury as a Global Pollutant.