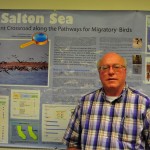 California’s largest lake, the Salton Sea, is rapidly changing because of increasing salinity and decreasing inflows. It will soon lose its role as an important habitat for migratory birds unless solutions to the myriad of problems are enacted. These problems include but are not limited to water quality and quantity, contaminants, increasing salinity, hyper-eutrophication, hydrogen sulfide emissions, and fugitive dust. Together, the U.S. Geological Survey and the State of California Natural Resources Agency are working to provide critical information, evaluations, and science oversight to aid in restoration planning. Both organizations are cooperating in the design and development of an integrated monitoring and assessment plan for the Salton Sea.

In 2007 the CA Department of Water Resources, acting on behalf of the Natural Resources Agency, released the Salton Sea Ecosystem Restoration Program PEIR that recommended a complex assemblage of actions that collectively represented the preferred alternative. A comprehensive and integrated Science Plan was developed to address diverse issues such as biological sustainability, water and air quality, contaminants, and social and economic values. Together the State of California and USGS were instrumental in bringing results of scientific studies into the restoration planning on issues such as predictive models of avian contaminants risks, air quality, water quality and quantity, and habitat management techniques. Unfortunately, economic constraints in recent years have left the preferred alternative unfunded. USGS scientists and others have explored the potential for using degraded agricultural drain water to create saline habitat ponds as a means of managing the ecological risk of severe habitat loss at the future Salton Sea. As a near-term action to address the imminent loss of fishery resources at the Salton Sea until a broader restoration solution is implemented, the Natural Resources Agency currently is proposing to create shallow, saline habitat, termed Species Conservation Habitat, for use by birds and fish as the lake’s salinity increases beyond most biological tolerances.

Dr. Barnum has degrees from the University of Missouri (1973), Washington State University (1975) and a Ph.D. from Brigham Young University in wildlife biology and range management (1980). He completed a post-doctoral research assignment with University of California-Davis. Prior to his current assignment with the US Geological Survey, Dr. Barnum worked for U.S. Fish and Wildlife Service and USGS as a research wildlife biologist principally on (a) wildlife interactions with agricultural drainage water in California’s Central Valley, and (b) livestock/endangered species relationships.Dr. Barnum has been involved in research at the Salton Sea since 1990, and since 2000, has worked as a Wildlife Biologist/Science Coordinator for the USGS Salton Sea Science Office in La Quinta, California. Dr. Barnum has been responsible for scientific oversight and coordination of Salton Sea science issues, has organized and chaired numerous special-topic workshops, published peer reviewed scientific articles, was the principal editor of the 2000 Salton Sea Symposium Proceedings, and was co-organizer of the 2005 Salton Sea Symposium. Dr. Barnum chaired the Science Committee for the State of California’s Salton Sea PEIR, and served on many of the PEIR technical working groups. Additionally Dr. Barnum serves on numerous scientific technical advisory committees as an independent expert.