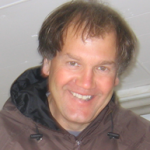 A tissue-based selenium (Se) standard was recently adopted by the State of Utah for the open-waters of Great Salt Lake (GSL). Localized Se concentrations in the south shore area of the lake have been under continued scrutiny by concerned citizen groups, as well as State and Federal regulators, because of current and planned Se inputs to this part of the ecosystem.

Based on previous studies conducted by the State of Utah and the USGS during 2006-08, the south shore of GSL consistently receives some of the most elevated concentrations of Se from natural (Lee Creek and Goggin Drain) and anthropogenic inflows associated with discharge from the Kennecott Utah Copper Corporation (KUCC) smelter tailings (up to 54 μg/L) relative to other GSL inflow areas. Additional Se input to the south shore area includes a planned waste stream from the Jordan Valley Water Conservancy District (JVWCD) groundwater treatment plant. To date (2012), no information exists on how Se concentrations vary in the south shore areas of GSL as a function of varying lake levels, salinities, input sources/concentrations, surface currents, and wind speed and direction.

On November 2, 2011, a rhodamine WT dye tracer was injected near the mouth of Lee Creek and the movement of this freshwater plume in GSL was mapped using an autonomous underwater vehicle and a manned boat, equipped with calibrated flurometers. Incorporating these field data into a 3-D model can provide insight into possible discharge management scenarios to minimize the impacts of Se inputs to sensitive lake habitats. For example, preliminary 3-D model simulations, using open-head boundaries on the northwest and southwest sides of the model grid, indicate that a strategically positioned 1,200-m long, rock-filled boardwalk may deflect freshwater inflow and the associated Se plumes away from shoreline waterfowl habitats, while also providing some unique tourist access to offshore areas of GSL (see figure). Ongoing model calibration approaches will be presented along with additional preliminary 3-D modeling results that will include the simulation of JVWCD Se input. 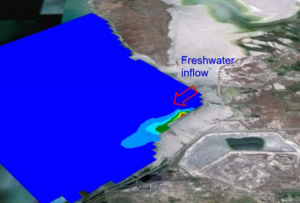 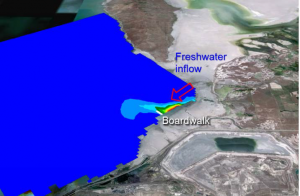 Simulated freshwater inflow plume extent on October 9th, 2011, at 0200 MDT, without (A) and with (B) a rock-filled boardwalk.

David L. Naftz has a B.Sc. degree in Geology from the University of Southern Colorado and a M.Sc. and Ph.D. in Geochemistry from the Colorado School of Mines. He has worked as a research hydrologist for the U.S. Geological Survey for 27 years on various projects in the western United States including the biogeochemical cycling of mercury, selenium, and uranium, paleoenvironmental reconstruction using ice and lake cores, biogeochemistry of Great Salt Lake, and application of passive and active technologies for groundwater, wetland, and reservoir remediation. Dave is an adjunct faculty member at the University of Utah and Utah State University and is the Water-Quality Specialist for the Utah Water Science Center. Naftz serves on the editorial board of Chemical Geology.