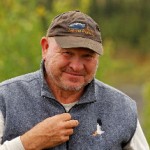 Twenty-seven species of shorebirds occur annually at GSL. Approximately 17 of these species occur  consistently in numbers greater than 100. Of these 17 species nine occur in numbers greater than five percent of the North American Population. Fifteen species occur in numbers five percent or greater of the Intermountain West population. The GSL ecosystem provides important habitat for an exceptional number of shorebird species and millions of shorebird individuals. As such, it is a primary stewardship area of local, regional, and international importance.

Don is president of AvianWest Inc., a bird and habitat conservation business. He currently serves on the Shorebird and Waterbird Science Teams for the Intermountain
West Joint Venture and recently served as a council member of the Waterbird Conservation Council of the Americas. He is an active member of the Linking Communities, Wetlands and Migratory Birds, Utah Committee.
He is a career wildlife biologist having served 34 years in several positions for the Utah Division of Wildlife Resources and four years as the Great Basin Bird Conservation Region Coordinator. He is published in both scientific and popular conservation literature. His career emphasis takes two directions, conservation biology with emphases in international community conservation linkages and avian conservation with experience in large-scale landscape bird monitoring.