Two retired Weber State professors recently kayaked a Great Salt Lake crossing to Fremont Island one calm, sunny July day. For years I have gazed across the sound at this Island, resolving someday to paddle to it and back. To make it an adventure, I would do it in my two-man, rigid frame Folbot built from a kit years ago. I wondered what I would encounter: exotic birds who inhabit only the distant western reaches of the Lake, huge salt water shrimp, harassment from the Air Force, swarms of flesh feasting insects or a sudden storm washing me upon a tiny, rocky island? 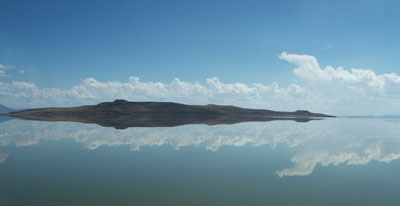 There are not many qualified retirees around willing to do this but I did manage to enlist Eric, of sturdy nordic heritage, and a student of code encryption. Thus, he could do the hard paddling and we would have plenty to talk about.

We slipped out of the Antelope Island marina early morning heading north. Fremont Island was barely visible but within a half hour of steady pacing we could make out the distinctive square knob of its highest point. In fact soon, it seemed as if we were almost there. This it seemed, but hardly so.

Often, we would stop and let the lake enfold us. Save the soft lapping of the waves against the fabric hull and a few busy gulls, it was silent. No noises of the city or even F-16's roaring above. I gazed into the lake water as far as I could see. It looked infinitely deep. Suddenly the waters came alive; I could see millions of tiny brine shrimp swimming in every direction. Clearly the Lake is a living organism itself.

It occurred to me that I was experiencing the Lake from a rare vantage point; usually visitors see it only from the shore, or from a commercial motor boat that is always moving or from an airplane. Seldom do we enjoy looking directly into the depths of the Lake and at what is there from a quiet, vantage point.

Two hours later we approached the shore of Fremont Island. We needed to stretch our legs and take a break. There was no convenient beach, only a sharp, rocky shelf which we gingerly guided the kayak over on foot so as not to rip the fabric.

Before us lay Fremont Island covered with cheat grass. A few cattle grazed in the distance. But, Immediately in front of us was a menacing phalanx of spider webs spun across the belt of bushes only a few yards from shore. Clearly these spiders were enjoying a full feast of brine flies.

We declined to breach the defenses and it was a good thing as well. Although there were no "No Trespassing " notices, we later learned that the island is leased from Granite Furniture and requires permission to enter.

The return journey took longer as our arms tired and the day heated up. For awhile the F-16's would make noisy passes overhead. A much more impressive aerial display was the huge flocks of pelicans wheeling five hundred feet above us. There were squadrons of them all executing an avian ballet. It astonished Eric and me how they would turn at the same time. We speculated whether this behavior was learned or instinctual but in any case, what its survival value might be. It seemed difficult not to think they were just soaring about for the fun of it. Perhaps that's just what GSL does to man and beast when you go there.

Finally we entered the marina again, our clothing stiff and crusty, ourselves weary and spent. I found that this unique water scape best offers herself to the visitor if you approach her on her own terms. Go quietly, slowly and open yourself to what may be there.