A Ride Around Great Salt Lake by Chad Harris 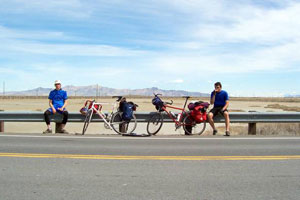 It began the way I believe many bicycle tours do, or at least should. I was aimlessly studying a map of the state when I saw a dirt road that connected to a gravel road, which led to the railroad tracks, which could be followed to this road, which winds its way up to that county road, which-ah hah. I had just discovered that it's possible to ride all the way around Great Salt Lake.

‘Discovered' may be too strong a word, but I don't think so. I bounced the idea off a few non-cyclist buddies, to which the general reply was "The military owns the land out there and they'll never let you through." In January I took a drive out there and found a public road that went through the Air Force property, so I knew it was possible.

Next I tried the idea on some cycling friends. When invited, they just stared at me incredulously and finally said "no." Finally I asked Mark Muir, whom I met in Seattle three years ago. He was another Utah expat who missed the stark desolation of the Great Basin as much as I did so it was easy to convince him to come. That's how it began, two Utah natives setting out to rediscover the bastard-child of Utah's natural resources. We were ready to take on what may be the first circumnavigation of Great Salt Lake by bicycle. We wanted to see the lake for what it is and for what our society has done to it. We wanted to feel the desolation of the desert and see the impact of the industries along the shoreline. We wanted to swat the flies and smell the stink. 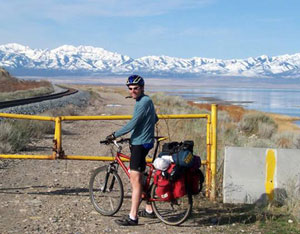 Our first day of riding set the theme for the entire ride. We spent most of Friday afternoon hastily mounting racks and panniers to our bikes and packing them with gear. Our 2:00 pm departure time was pushed back to 6:30 that evening. We had wanted to get in about fifty miles that day but were happy to make it to the Great Salt Lake State Marina just west of Saltair. On the way we met up with a group of six riders from the Bonneville Bicycle Touring Club. We rode with them for several miles and told them about our trip. As we arrived at Saltair and said goodbye, one of them portended "I hope you have enough water." So did we.

If Friday's late start was a dark cloud looming on the horizon, then Saturday's ride was the tempest in her fury. We paid for our hasty preparation all day long.

The problems started before we left the marina. My front tire was flat. I had Slime® in my tubes so I thought I could just pump it up and continue. I made it about a hundred yards before it went flat again. The slime was the problem. Some of it had dried up in the stem, preventing the stem from sealing properly.

I laid my bike on its side without removing the panniers to change the tube. The weight of my load must have bent my rack slightly because when I started riding again my fender was rubbing on the rear tire. I fiddled with it for another fifteen minutes before I gave up and removed the fender. I strapped it on top of my panniers next to my defunct Slime® tube.

The goal of our ride was to circle the lake by riding as close as practical to the shoreline. So this meant we took the road along the railroad tracks just north of Interstate-80. It seemed like a good idea based on our map. 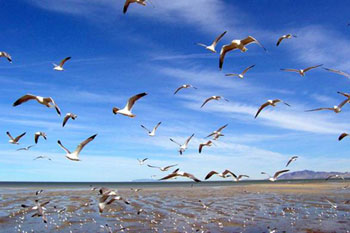 About five miles down this rocky road the interstate bends to the south around the lakeshore while our road continued straight. There was water on both sides of us and we were engulfed by a flock of seagulls. Somehow over the noise of the birds Mark heard some jarring noises coming from his rack. One of the bolts that held the rack to the frame had vibrated loose. Well-prepared bicycle tourists have extra bolts stowed away for this sort of emergency. We borrowed one of the bolts holding on Mark's water bottle cage instead.

My rack had the same problem a few minutes later. This was the first of four times that my rack came off that day. My bike doesn't have braze-ons on the seat stays for mounting a rack so I used some pipe clamps purchased at a hardware store. I'd used this method on several tours before; in fact, I was using the same clamps from previous tours. When my rack started making noises I saw that I had not only lost a bolt down near the hub, but one of my pipe clamps had broken too.

I used the bolt from the broken pipe clamp to replace the bolt I had lost on the rack. Then I connected both frame supports to the one remaining pipe clamp. Once again, well-prepared bicycle tourists have extra pipe clamps stowed for emergencies like this.

When I-80 rejoined the railway we decided to leave the rocky railway access road and ride on the freeway. Here Mark discovered the first of two broken spokes his rear wheel suffered. Well-prepared bicycle tourists have extra spokes stowed for emergencies like this. This time we were prepared with extra spokes.

We rode about twenty miles on the freeway and got honks of support from a passing car with a bike rack on the roof. We turned north on the road to Rowley and the US Magnesium plant with its thick yellow cloud of chlorine gas. US Magnesium removes magnesium chloride from Great Salt Lake water to produce magnesium metal. In the process they release millions of pounds of chlorine into the atmosphere and are the top producer of dioxins in the country, according to EPA's 2004 Toxics Release Inventory. We were happy to have tailwind blowing the toxic plume away from us as we approached.

North of US Magnesium we turned west again and climbed over Wrathall Pass in the Lakeside Mountains. The last pipe clamp holding on my rack broke on the way down the pass. My panniers dragged on the road before I could stop. Some guys in a Union Pacific truck stopped as we were fixing it to see if they could help. We had the rack reattached by then and didn't need help, so they warned us that some Indians were camping near Lakeside, about 20 miles away. I don't know what they meant by that, but we were going to camp at Lakeside anyway.

With the gear problems we'd had you might think we staggered the last 20 miles into lakeside to set up camp. But that's not how it happened. The dirt road through the military land was smooth like pavement. The sunset was brilliant and the Indians turned out to be Basque sheepherders. We set up our tent between the railroad tracks and Strong's Knob, one of the small islands in the lake. We cooked cheese ravioli and watched the Avocets feeding on the shore. The noise of the wind and passing trains kept us awake for a while but soon exhaustion set in and we slept. 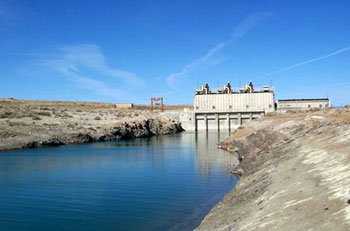 On Sunday we turned west from Lakeside toward Hogup Siding and the pumping station built after the 1983 flood to control the lake level. We rode on another rocky railroad causeway and were again passed by some Union Pacific workers in a truck. They stopped and asked "Are you lost?" This was a legitimate question considering how out of place we must have looked. I smiled and asked "is this the way to Wendover?" In hindsight, I should have asked them for some water.

Our water supplies were running low when we finally met up with an improved dirt road west of Dolphin Island. We left Salt Lake City carrying about six liters of water each and were lucky to have camped at the State Marina on Friday night where they had running water. We were twenty miles from the ghost town of Kelton, which our map said had a flowing well. Thankfully, road to Kelton was straight and smooth otherwise we might have run out of water. 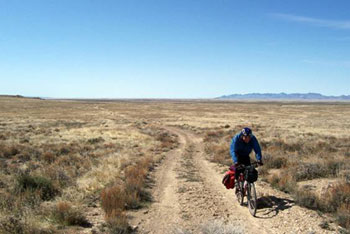 I had an inch of water in my bottle when we arrived at the Kelton cemetery. Mark's water bottle was half full. We strolled through the cemetery and read the historical signs put up by the Bureau of Land Management before we looked for the well. We figured it would be an island of greenery in this sea of sage. Instead it was a mirage. The well was still there, but it was full of cobwebs. I couldn't see water down in the pipe, and had nothing to retrieve it if any was there. We had to continue east to Locomotive Springs, fifteen miles away.

Some teenagers in a pickup truck drove by and gave us their last bottle of water. I drank half of it before they had driven out of sight. It made the last few miles to the springs easier.

After pumping water from Locomotive Springs we rode east along the historic railroad grade to Monument Rock. We camped that night on the salt flats at the base of the rock and contemplated riding across the smooth surface all the way to Promontory Point.

We woke up early Monday morning to a light rain and the necessity of riding all the way to Salt Lake City before nightfall. We had twenty miles of gravel road over the Promontory Mountains before we got to Golden Spike National Historic Site and paved roads. We didn't spend long at Golden Spike because we were looking forward to a huge lunch at Idle Isle in Brigham City, the third oldest restaurant in Utah. 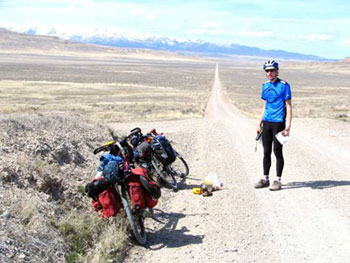 Our stomachs were slightly distended when we rode out of Brigham City so we labored through the first few miles of highway 89 through Perry, Willard, Plain City and Hooper. We made one last stop at the Great Salt Lake Shorelands Preserve southwest of Clearfield where The Nature Conservancy has preserved 4,000 acres of marshes, ponds and mudflats with a mile-long boardwalk running through them to a 30-foot observation tower overlooking the lake. It's a peaceful place for birders, kids and cyclists.

The last 25 miles were a race against the sun with North Temple in downtown Salt Lake as the finish line. We crossed it shortly after 8:00 that evening, shook hands in front of Crown Burgers and sprinted for the light rail. People on the train looked at us a little funny. I wanted to explain to them what we had just done, but I thought they would not understand the significance of it. Something inside us had turned around. We set out to rediscover an underappreciated natural resource. We had seen the treasures of Great Salt Lake and experienced the harsh realities of its stark landscape. We had felt the desolation and knew the irony of being parched on the shore of a desert oasis. Yet we already longed to be out there again. We had turned the pedals but it was the lake that had turned on us to show us its unique beauty.

PLEASE NOTE:  This article first appeared in the May 2006 issue of Cycling Utah (http://www.cyclingutah.com/may/May2006Issue.pdf)