Evening Banquet at the Alta Club

8:30: 2016 Friend of the Lake Award Presentation to the GSL Ecosystem Program 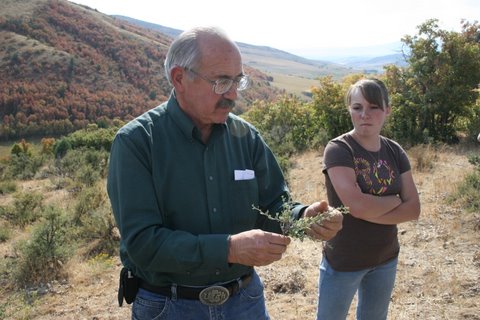 Fee grew up in a small town in west Texas.  One of his most vivid childhood memories were the clouds of dust that would blow up from the cultivated fields during the “little” dust bowl of the 1950s.  One of his objectives has been to not let that happen again – on agricultural land or the exposed bed of the Great Salt Lake.

Fee’s high school graduation class numbered 10.  What he enjoyed most in school was Vocational Agriculture and FFA.  His goal was to become a high school vocational agriculture teacher.  This dream lasted until his senior year in College.   When he did his student teaching he learned that he was not cut out to be a high school teacher.  Fortunately, while preparing to teach high school, he had taken several classes in rangeland management thinking that would be a good subject to include in vocational agriculture classes in west Texas.  Making the transition from the BS in Vocational Agriculture Education to an MS in Rangeland Ecology was easy.

Fee says that during college he had some great teachers.  A couple are fondly remembered because of their effort to help him succeed.  Their engagement reignited his desire to teach, but at the college rather than high school level.  He finished his MS, earned his PhD (at Utah State) and taught for several years before being enticed to serve as a Department Head.  That led to several other administrative positions, the last being Dean of the College of Natural Resources at USU.  In 2005, he stepped down as Dean.  The last piece of paper he signed as Dean was appointing himself to a teaching position.  He had decided that during the rest of his career that he would attempt to do for others what those outstanding college teachers had done for him – help every student graduate prepared to and wanting to make a difference in the management of natural resources.

Fee says he wants to bring to Friends of Great Salt Lake a message of joy and of hope – joy in what we have accomplished and hope to continue to make a positive difference in the Great Salt Lake Ecosystem.

"Since 1883, the Alta Club has been the gathering place for Utah’s business, educational and political leaders. Originally modeled after the private club that flourished on the east and west costs in the late nineteenth century, the Alta Club has retained a traditional spirit while embracing the present. Located in the beautifully restored and historically significant Alta Club building in the heart of downtown Salt Lake City, the Club will provide a unique experience of fine dining and a memorable experience.

Driving Directions from the Fort Douglas area to the Alta Club